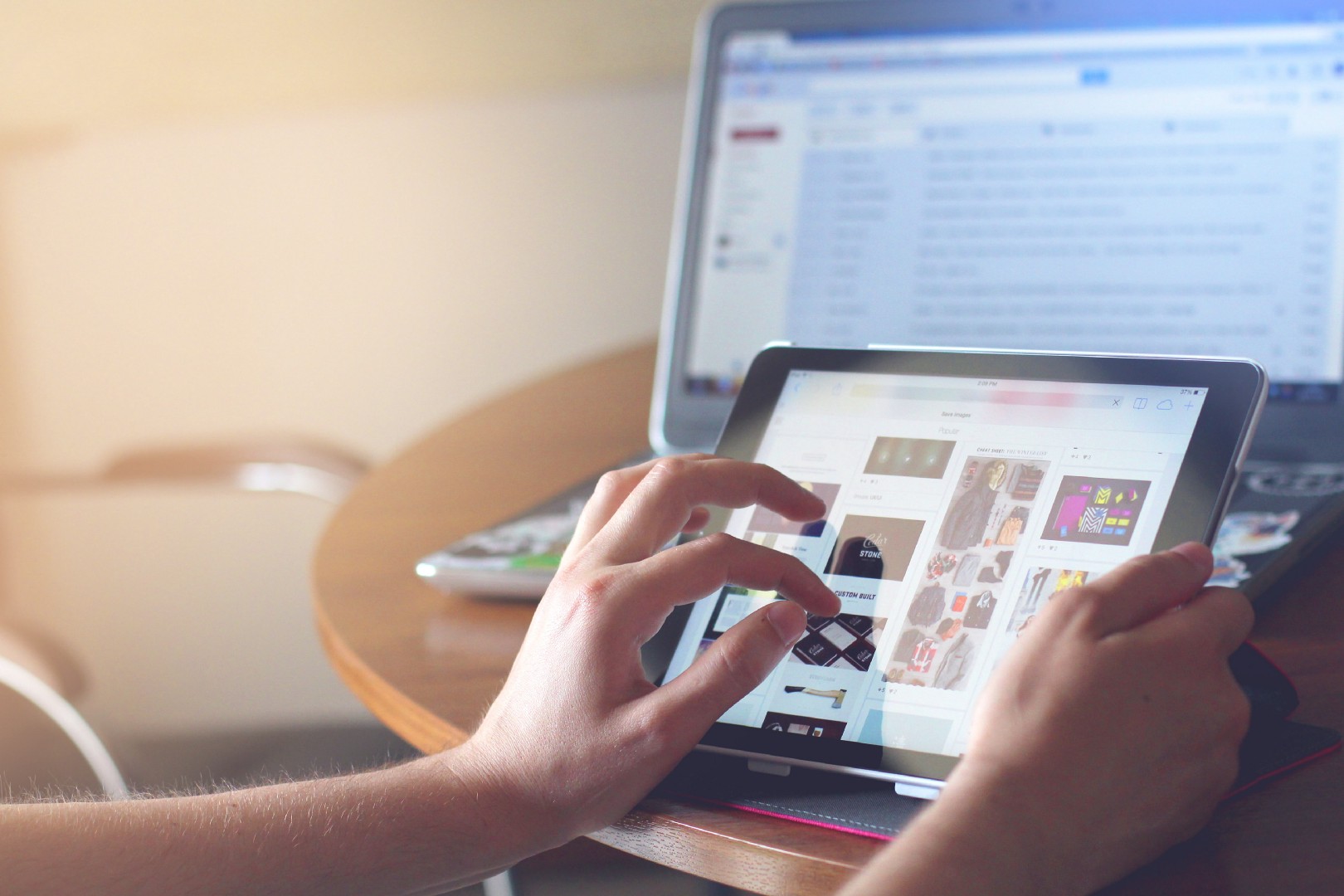 User Interface Designers lacked proper design tools for years. Fortunately with the appearance of Sketch 10 years ago, things started to change and now with Adobe XD, Figma and other tools entering the market we’re starting to see fierce competition. These tools certainly make designers lives much easier than before, but at the same time, designers are now being tasked with designing ever more complex apps, involving hundreds of different screens.

My background is in Architecture and I watched this competition between tools take place 20 years ago. When I started they were but a digital way to do the same drawings we did on paper. But then, tools evolved and parametric design entered the stage.

Parametric design is widely used in Architecture where the relationship between elements is used to modify and inform the design of complex geometries and structures. World-renowned architects like Zaha Hadid, Norman Foster or Santiago Calatrava use parameters to generate complex geometries through graphical programming interfaces, which would have been impossible to achieve with traditional design methods.

In Design, parametric refers to a process based on algorithmic thinking that uses parameters and their interrelations to define a geometric form (which can be buttons, containers, panels, etc.). The design of the object is then replaced for the design of the process that generates the object.

Existing tools already allow for some spacing adjustments, however there still isn’t one that fully comprises the scope of parametric design. This method can generate forms connected to code components, making it easier to make changes. In a time where design demands and requests are constant and deadlines are tighter, parametric design can be a game changer in team productivity.

So how would this work?

Parametric design can be applied when designing user interfaces since the designer can define parameters and their interrelations to define objects. To better understand how parametric design works it’s important to clarify some of its terms. So let’s start by looking at these two buttons — A and B. Each button is an object (which can be any element of the design, like a button, a container or panel) and there’s a relationship between the two, in this case it’s the distance between button A and button B. We can set a parameter for each one, let’s say, the button’s width and distance from other buttons, which would be our values. Finally, the combination of a parameter and a specific value defined by the designer is called the attribute. 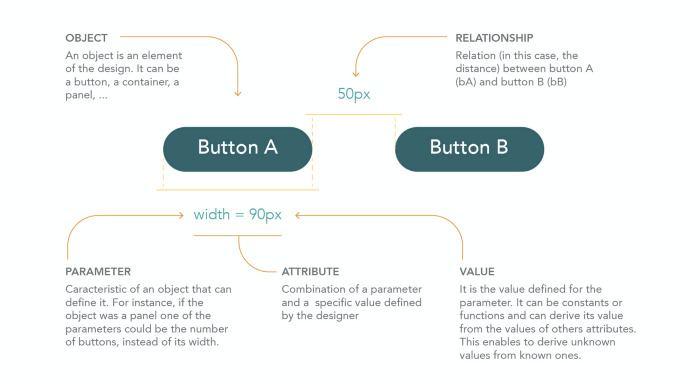 So let’s look at an example. Here’s a mobile screen with Button A and Button B. Button A width is set to be 80px and the relationship between the two buttons is 10px, however the designer didn’t define the distance between the edge of button B and the edge of the screen. 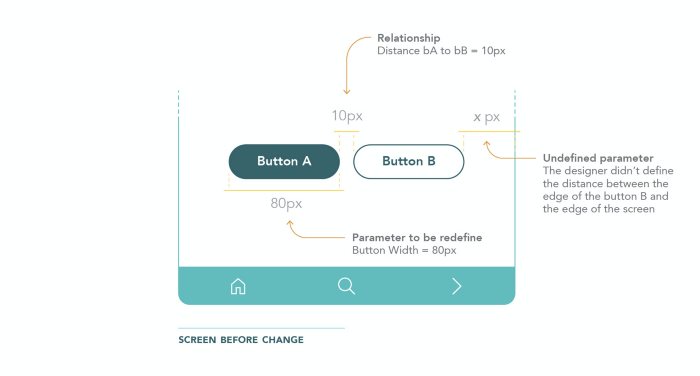 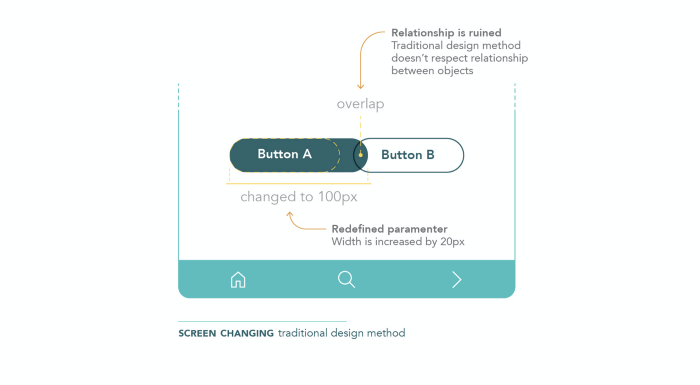 On the other hand, if we follow the parametric design method and change Button A’s width to 100px, and establish that the relationship between the two buttons should always be 10 px, then that distance to Button B will always be respected no matter the attribute given to Button A. In order to maintain relationships between objects, some undefined parameters may change as a consequence. In the example bellow, the distance between Button B and the edge of the screen became smaller. 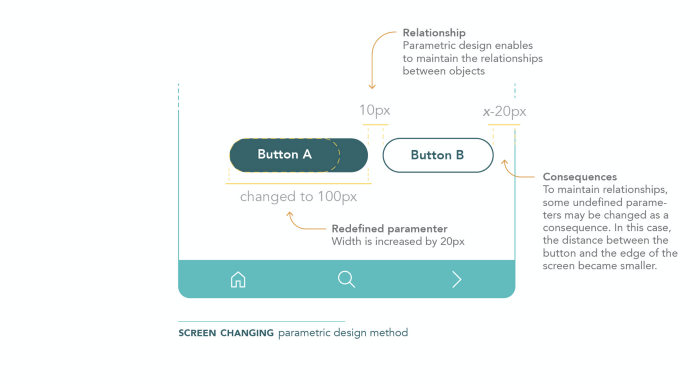 Now let’s imagine we redefine Button A’s parameter and increase its width to 160px. Since Button B is larger that the remaining space, it moves to right under Button A. It is then necessary to define the top spacing between the two objects. 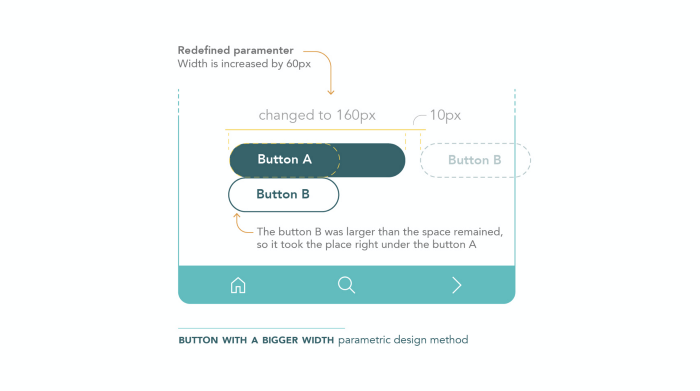 Let’s crank it up a notch

But you can do all of that with auto-flow tools in current apps, you’d say. Yes, in a way. But there’s no way to address the instances of design elements as their own objects. And it only works on a macro level. Why is this important? 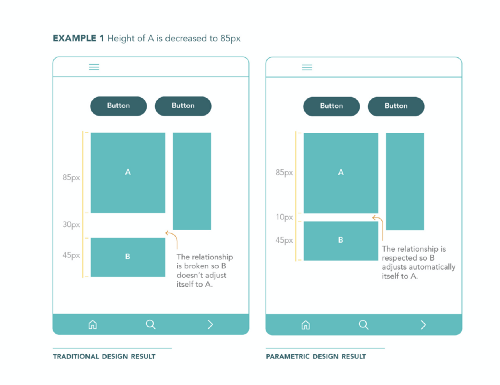 Consider the following example. In the original screen, container A height is 115px, B is 45px and the relationship between the two is 10px of padding. Now, let’s imagine we need to redesign container A and it’s now shorter, with a heigh of only 85px. With current tools, container B doesn’t adjust itself to A so now there’s a huge gap between them. Imagine this across dozens of screens you now need to adjust. In parametric design we can set that relationship so that container B is always 10 px from the lower edge of A, so if A becomes shorter, B will move upwards.

And if A becomes larger, it pushes B downwards, instead of overlapping and breaking the design. If this happens to influence other containers around them, all you have to do is change a few parameters in those containers and the screens using them will magically re-arrange themselves. This considerably speeds up the design process whenever you need to make adjustments across the board. 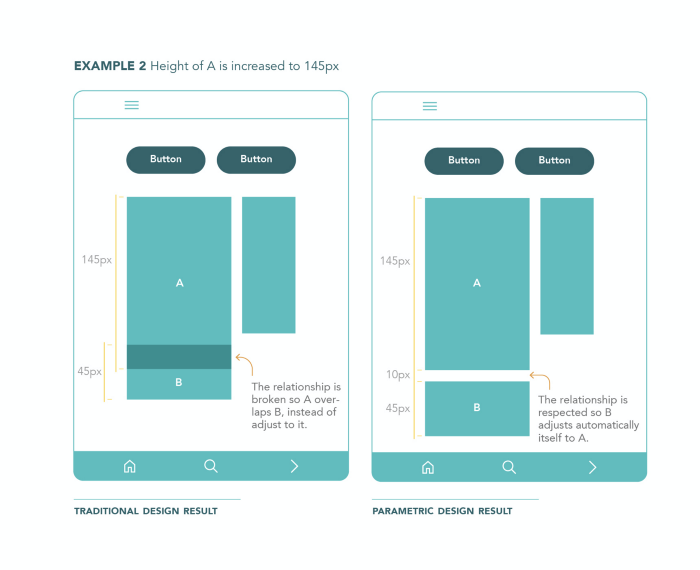 Speeding up the design of complex apps

Parametric design is particularly important when designing complex apps and websites that comprise a large amount of screens, and when the project is constantly suffering changes. For example, you design a dashboard with a notifications element common to several screens, but at a certain point of the project, the client says he needs fewer elements. In a traditional design approach, adjusting this element would create large gaps in the design that would have to be manually readjusted. With parametric design elements, if an object is already defined, relationships between this object and other objects can be introduced and adjusted at any time and would be reflected in every screen you designed. You can even introduce different relationships between different elements, so that when in presence of Object Y, it would behave a certain way, and in the presence of Object Z it would have a completely different behaviour. The possibilities are tremendous, particularly for large scale or long duration projects.

A design system is a library of interface components and patterns that are now increasingly used inside product teams to ensure consistency across a wide range of apps. Given the ongoing nature and constant evolution of these, parametric design is particularly adept at reflecting changes across a wide set of screens. If a pattern or widget is set as an object, it can be used and infinitely adjusted according to different parameters, and then reflected across the entire ecosystem of apps using that design system.

The possibilities are endless

So as you can see, parametric design offers new and powerful ways to design apps. It not only lets you deploy changes very quickly, it also lets you affect design after the elements have been laid out on a screen. And with the right parameters set, you don’t even have to position objects on a page, you can just specify which objects are present on a given page and the objects will be automatically laid out. It’s also a better reflection of the process of development, that with the parameters exposed can perform their work considerably faster.